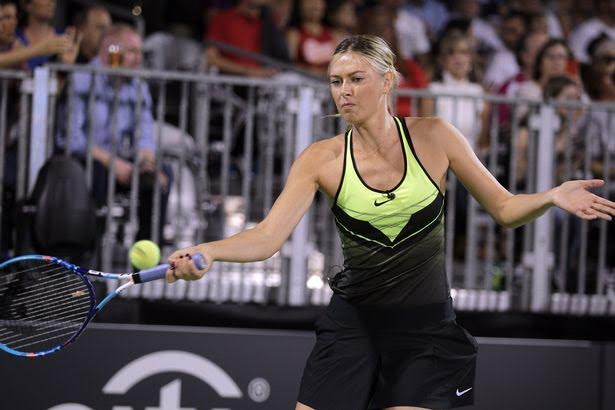 Sharapova is currently serving a 15-month suspension after testing positive for banned substance meldonium at the Australian Open in January Maria Sharapova returned to a tennis court for the first time since January - as she appeared at a charity event in Las Vegas. The Russian's last competitive match on the WTA Tour came at the first Grand Slam of the year, the Australian Open, which she exited at the quarter-final stage following a straight-sets defeat to Serena Williams. In March the five-time Major winner revealed that she had failed a drug test during the tournament in Melbourne, before she was handed a two-year suspension in June. Sharapova will be able to return to the tour in April 2017 after her ban for taking prohibited substance meldonium was reduced to 15 months. Sharapova, who won Wimbledon in 2004 aged just 17, showed no signs of rustiness after such a long spell out as she tested herself against some of the game's greatest players at the World Team Tennis Smash Hits event in Vegas on Monday night. Andy Roddick, Martina Navratilova and John McEnroe were all in attendance as money was raised at Caesar's Palace to benefit the Elton John AIDS Foundation. Sharapova partnered American youngster Taylor Johnson as they lost against Navratilova and Liezel Huber in a women's doubles match. "It was a big occasion for her (Johnson) and also for me," Sharapova said. "I haven't been on a court for a while, for both of us, it was to have some fun and a bit of laughs." Later in the evening Sharapova and McEnroe faced off against Roddick and Navratilova in something of an all-star match on the multicoloured court in Sin City.